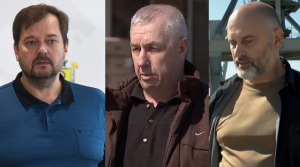 The State Security Service of Ukraine identified collaborators in Melitopol and Berdyansk who helped Russia to steal over 650 thousand tons of Ukrainian grain with estimated value of over 200 million USD on the temporary occupied territories of Kherson and Zaporizhzhia oblasts, as the Center for Journalist Investigations informs.

As the State Security Service reports, Balytsky issued «decree» in accordance with which the property of six agricultural enterprises and grain terminals on the territory of Zaporizhzhia oblast was illegally transferred to company «State Grain Operator» created by occupants.

Accusations were put forward by the State Security Service of Ukraine, according to three articles of the Criminal Code of Ukraine: part 8 of article 111-1 (collaborator activity), article 111-2 (aiding aggressor), part 2 of article 28, part 1 of article 438 (violation of war laws).

The property and corporate rights of Balytsky and his family were arrested (4 planes in Kyiv oblast; total value is over 149 million UAH).

As reported earlier, Balytsky was informed about suspicion in collaborator activity on May 26, 2022.

The CJI reported about caravans with stolen Ukrainian grain, visible by satellites, and schemes of transportation of stolen grain through Crimea in an investigation «Kerch way of «grain express».

Before Russian occupation, Volodymyr Stelmachenko worked in Berdyansk Port as Deputy Head of the Service on Shipping and Ecological Security. The CJI uncovered his past and present activity in the investigative report «Port Rats. Who help Russian occupants plunder Ukraine?»

Material is prepared by non-profit «Information press center» within IWPR project under the support of the European Union and the Royal Norwegian Ministry of Foreign Affairs.