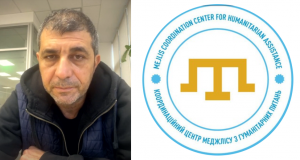 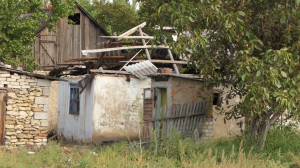 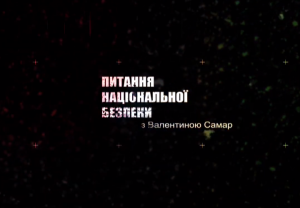 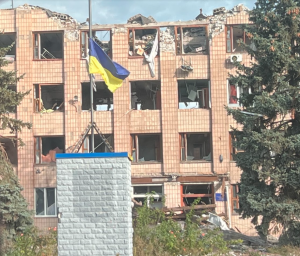 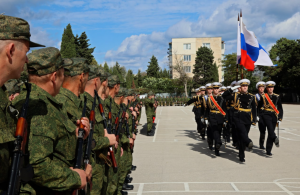 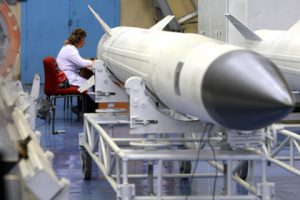 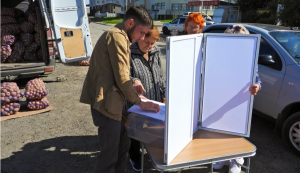 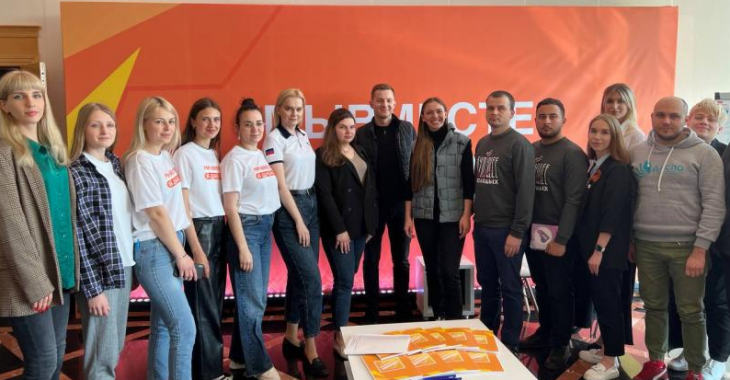 One of the most visible Russian pseudo-volunteer initiatives on occupied territories is called #мывместе с Донбассом (we are together with Donbas). The website of this project announces recruitment of volunteers to support population of so-called “DNR” and “LNR”.

Volunteers for occupied Donbas are selected by … the Russian Federal Agency for Youth Affairs! Its task “to organize the work for supporting volunteer activity” in occupied Eastern Ukraine is mandated by the Decree of the Russian President “About Support of Volunteer Activity on Territories of DNR and LNR” (# 247 from 30.04.22). In its turn, the Federal Agency approved procedures to select and train volunteers. Volunteer and charitable activity is strictly regulated by the government in Russia.

Artem Metelev, deputy of the State Duma of the Russian Federation and head of its committee on youth affairs, has been among key initiators of #мывместе movement. He has an extensive experience in governing youth affairs in Russia. He started his “youth career” in “Molodaya Gvardia” (Young Guard), so-called “komsomol” of Russian ruling political party “Edinaya Rossia” (Unified Russia). He managed student changes at “Seliger” forum conducted by Russian neo-fascist movement “Nashi” (Our People). In 2014-2016, he worked for governmental “Rosspatriotcenter”. The goal of this organization under the Russian Ministry of Defence is military and patriotic education of the Russian youth. 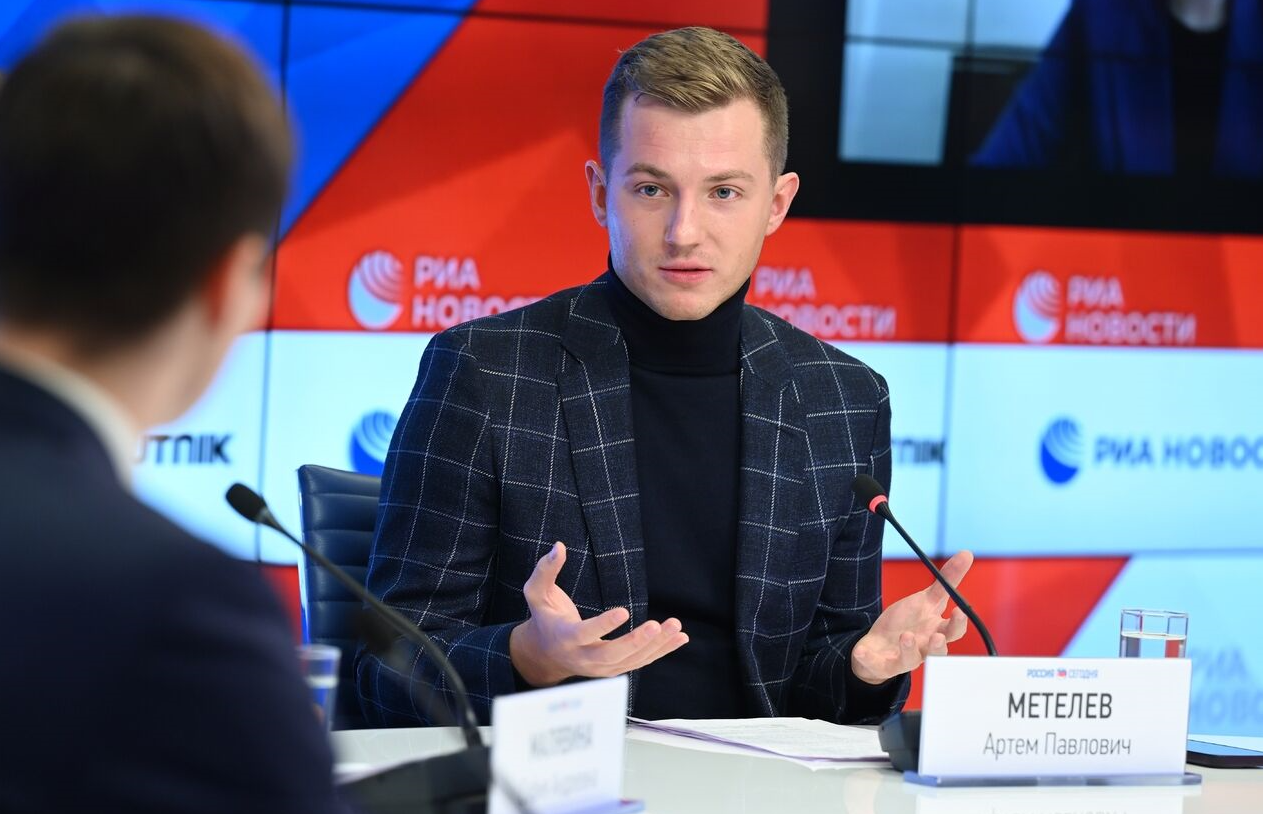 In 2017, Metelev was appointed to head the board of “Association of Volunteer Centers”, “non-governmental organization” created upon president Putin’s initiative in 2014 “to continue volunteer traditions of Olympic Games in Sochi”. In 2020, Metelev co-founded  volunteer initiative #мывместе, initially called upon to help victims of Covid-19 pandemics.

Under Metelev’s management, the Association of Volunteer Centers significantly expanded the scope of its activity. As reported, Metelev advocated for changing Russian legislation and supporting volunteer movement from the state budget.

He set up online platform Dobro.ru trying to coordinate all volunteers on the territory of the Russian Federation. In fact, platform is an instrument of state control over “volunteer initiatives” scattered around the country. Dobro.ru declares that 50 264 organizations registered in its database and propose their projects. Over 2.7 million people are also registered as volunteers.

Web-pages of registered organizations and volunteers have their rating within Dobro.ru system. Participation of people in volunteer activity as well as overall time spent for volunteer projects (“volunteer hours”) are registered and displayed by the system.

It is interesting that organizations with the highest ranking are Association of Volunteer Centers (the founder of Dobro system), the Ministry of Construction of the Russian Federation, “Rosspatriotcenter” and state monopoly “Russian Railways”. The fifth place is taken by All-Russian public movement “Volunteers-doctors”.

This approach can be called unique “Russian know how”: some governmental functions are performed by unpaid volunteers who are thoroughly selected and trained.

The first headquarters of project #мывместе с Донбассом was opened in Donetsk on May 5, 2022. The ceremony was attended by high level Russian public officials: Sergei Kirienko, the First Deputy Head of the Administration of the President of the Russian Federation (he is also curator of occupied territories of Ukraine), Ksenia Razuvaeva, the Head of the Russian Federal Agency for Youth Affairs and Denis Pushilin, so-called “head of DNR”. The project office was opened in Luhansk on May 20, 2022. 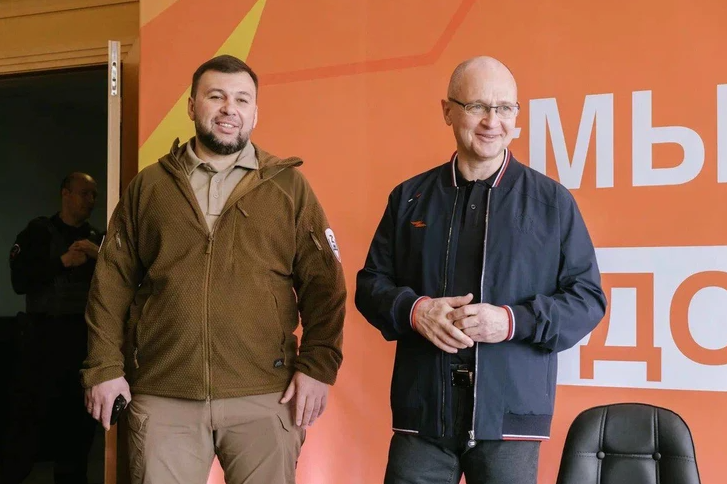 Thus, the Russian government strictly controls the delivery of “volunteer assistance” to “people’s republics”. Project #мывместе с Донбассом is implemented in the form of separate “humanitarian missions” about reconstruction of infrastructural objects, healthcare assistance, renewal of secondary education and even “media volunteership”. Each “humanitarian mission” is realized by working group including the Association of Volunteer Centers, representatives of the Federal Agency for Youth Affairs, the Russian Federal Security Service, the Russian Ministry of Defence, the Ministry of Foreign Affairs and other organizations.

Candidates for “volunteers” should meet a number of requirements. First, they should be adults with valid Russian citizenship. Second, they should register at Dobro.ru and give their personal data to organizers. Then, potential volunteer must confirm his or her motivation to participate in the program as well as working experience in the chosen sphere and guarantee that he or she will not suspend participation in the “humanitarian mission” (the time of mission is determined by organizers and lasts from 14 to 40 days).

Candidate has to go through multi-stage competition: submission of application, testing and interview, selection and three days training organized by regional headquarters of the project in Rostov oblast. 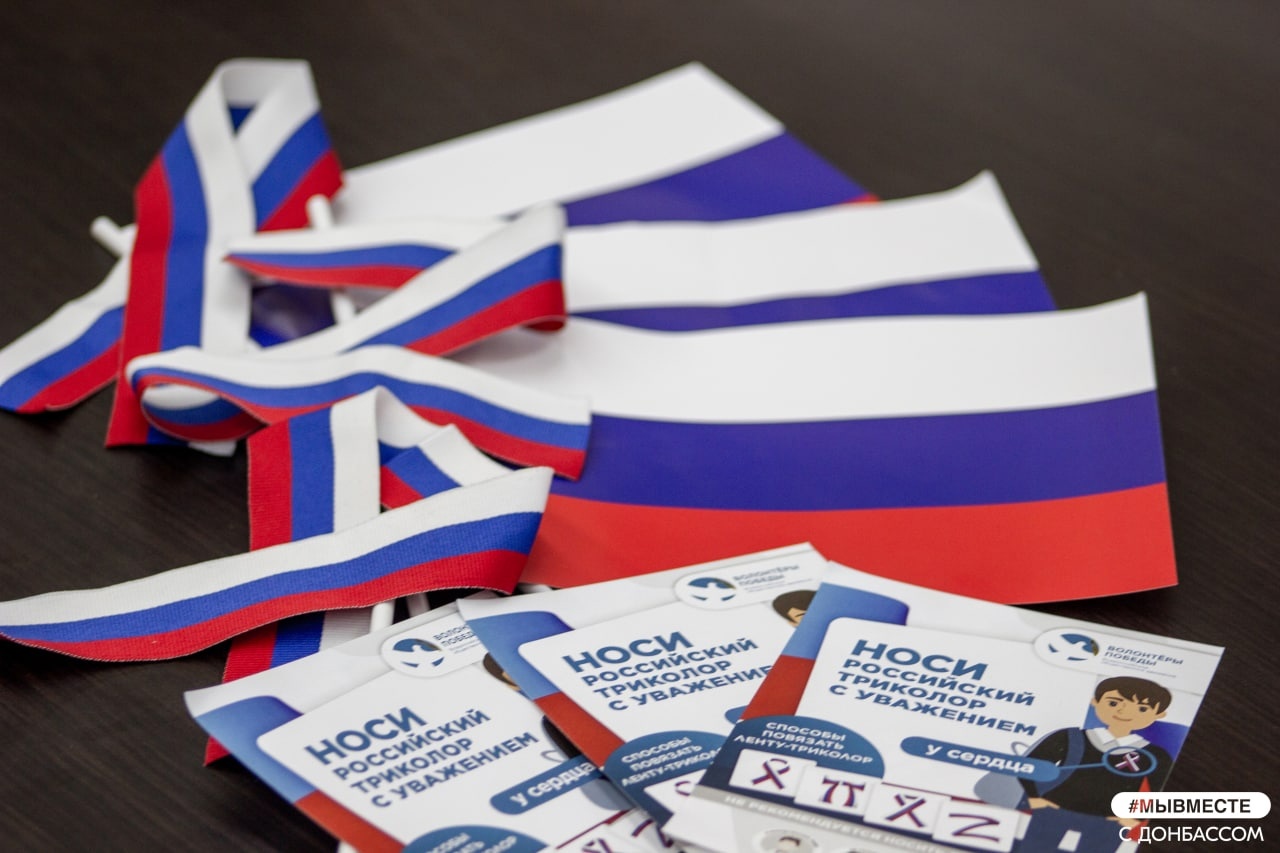 Besides that, there are a number of requirements towards “receiving party”. In order to receive volunteer assistance, “organizations” from “DNR” and “LNR” should submit applications through portal Dobro.ru. It should be noted that participation of independent non-governmental organizations is impossible. Article 5 of the “procedure to select and train volunteers” stipulates that “receiving organization” should not be within the list of unwanted foreign or international organizations (so-called “foreign agents”) and should not be included into the list of “extremist” organizations or organizations banned on the territory of the Russian Federation.

Currently, #мывместе с Донбассом presents information about ten “humanitarian missions” which should be implemented from June to December 2022 (volunteers are already recruited for three missions).

Advantages for volunteers are not obvious. The work is not paid. Organizers cover travel to the place of mission and return to the Russian Federation, meals, accommodation, healthcare and psychological assistance, if needed.

The only evident incentive for the Russian youth to participate in “missions” is to use this “patriotic lift” for making further career within the Russian governmental bodies. Classical social mobility lifts were closed or shut down in authoritarian Russia long time ago.

However, it is difficult for organizers to hide true purpose of these “volunteer missions”.

Movement #мывместе actively conducted propaganda events in Donetsk and Luhansk to celebrate the Day of the Russian Flag on August 22, 2022. Tag #мывместе с Донбассом (we are together with Donbas) was “suddenly” transformed into tag #мывместе с Россией (we are together with Russia), the main slogan of propaganda campaign underpinning “referendum” to “unite” occupied territories of Eastern and Southern Ukraine with the Russian Federation. People with signs “Volunteer of Victory” gave Russian flags and badges “Carry Russian tri-color with respect, near your heart”. It is clear that these measures have nothing to do with humanitarian obligations of Russia as an aggressor and occupant. 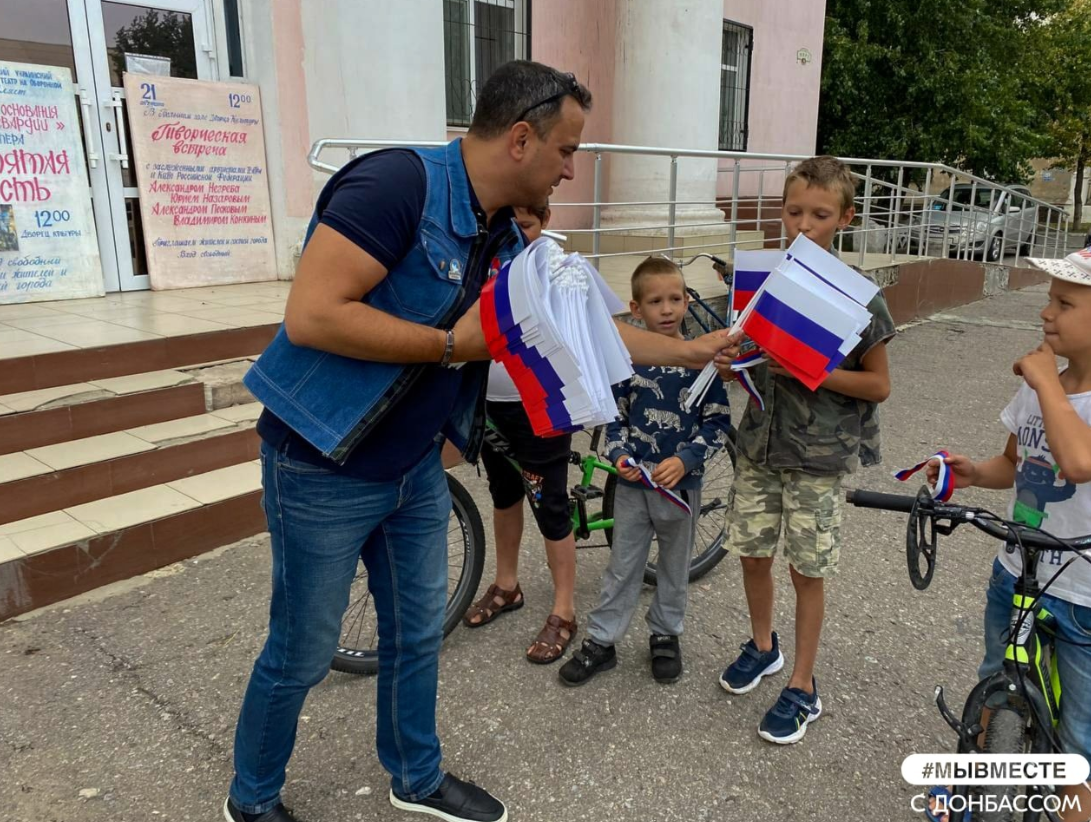 It is not surprising that movement #мывместе closely cooperates with occupation authorities in Donetsk and Luhansk. What is unique is that it gradually merges with para-military and police bodies of occupation and Russian authorities.

Movement #мывместе in Donetsk and its regional representative Anna Arteeva (presumably, resident of Khartzysk) actively cooperates and coordinates its work with organization “Narodnaya druzhyna DNR” (People’s team of DNR). It is aimed at “creating conditions for patriotic education of citizens of DNR by contributing to the maintenance of public order”. Organization distributes food products among civilians, simultaneously delivers military assistance to “people’s militia of DNR” and promotes “heroes of the Soviet law-enforcement bodies”. 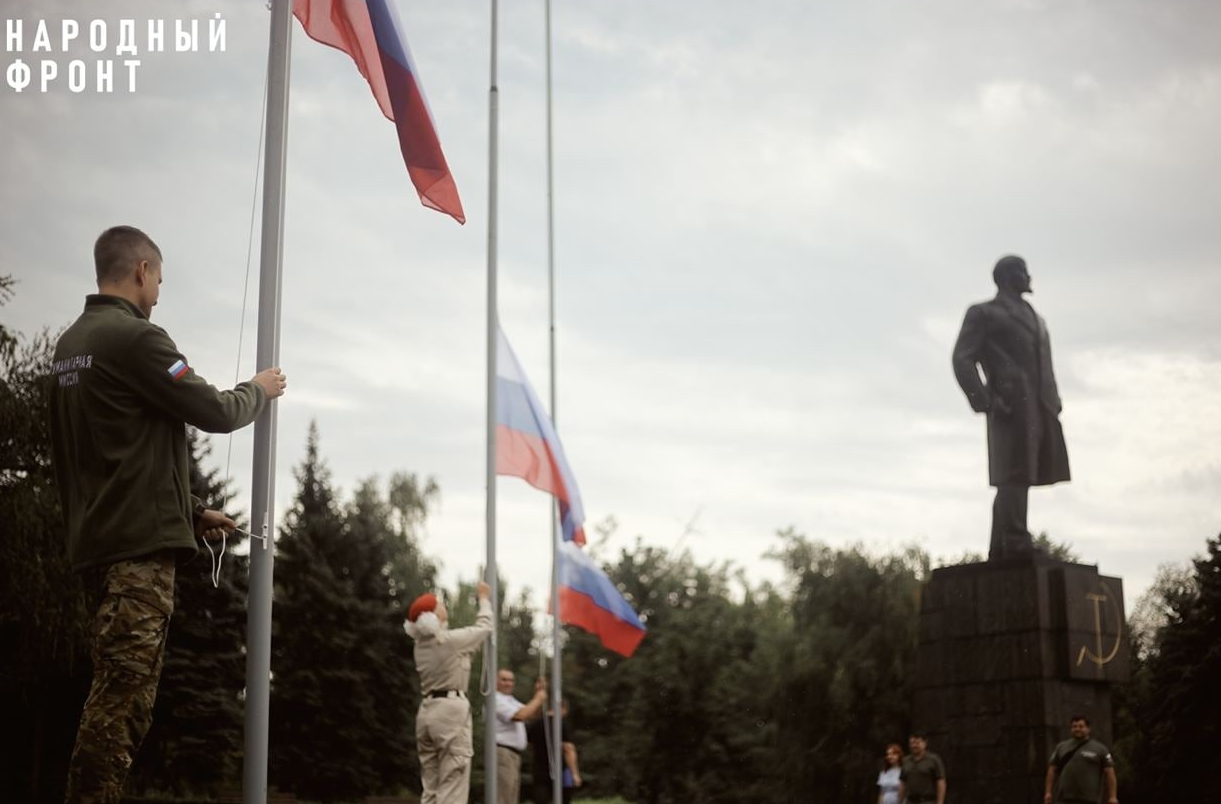 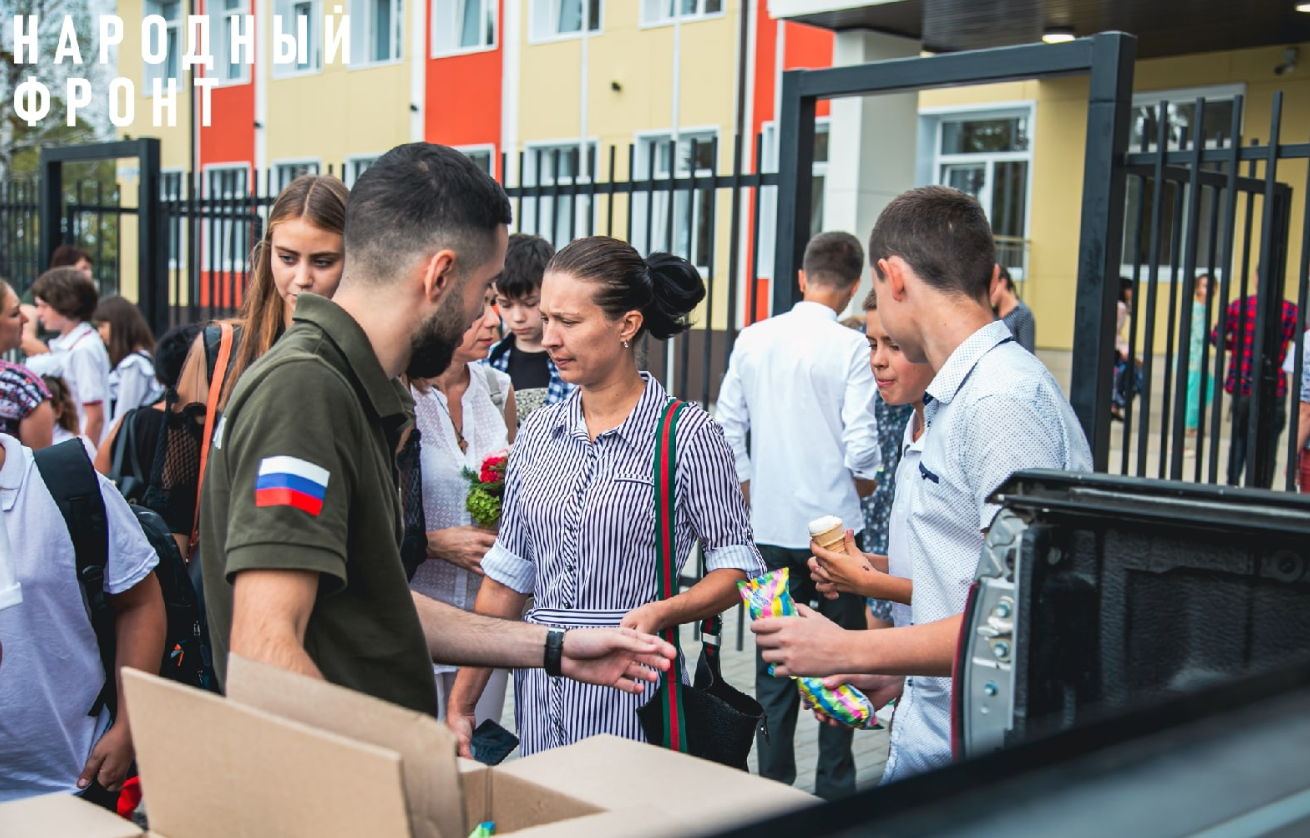 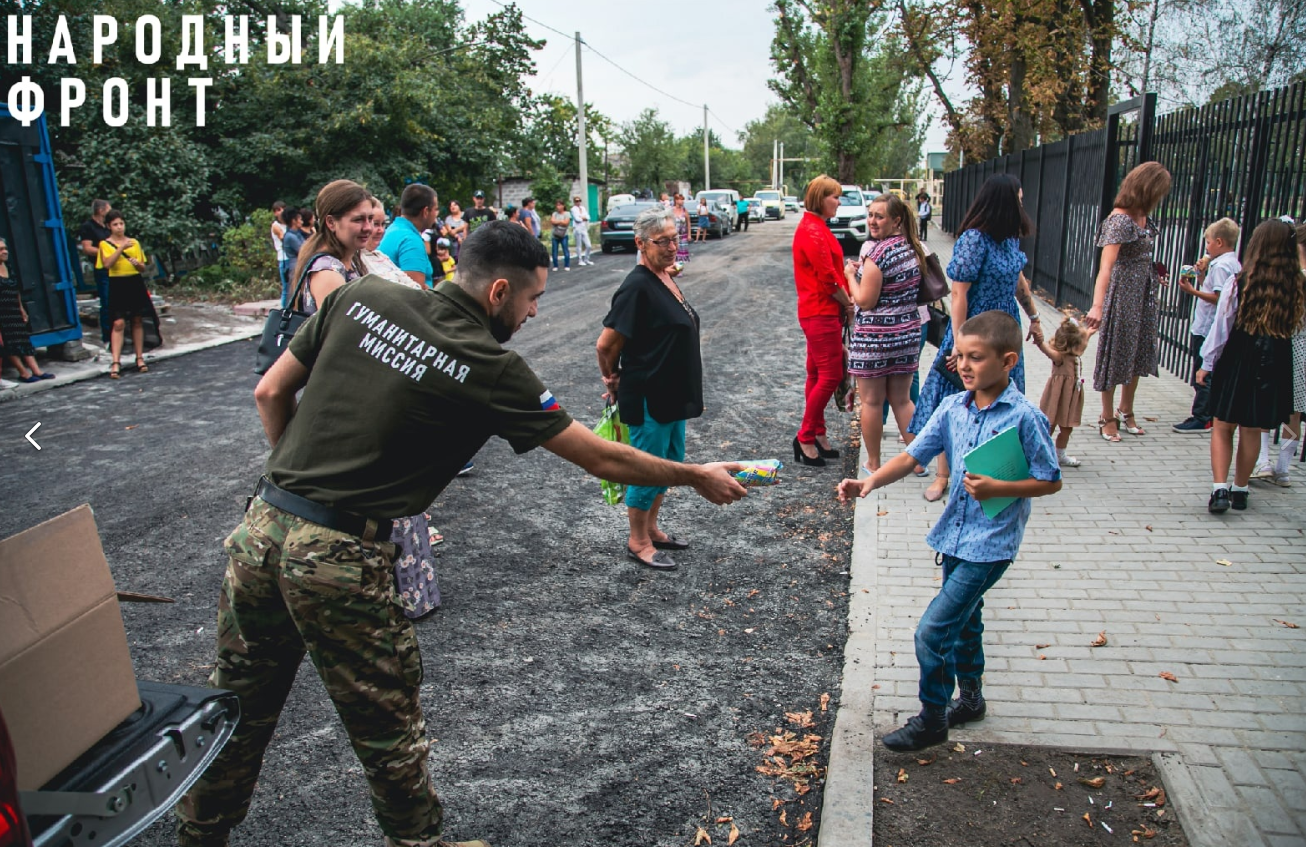 In July 2022, Anna Arteeva, coordinator of  #мывместе, participated in events commemorating “memory day of children, victims of the war in Donbas”. She condemned “crimes of Ukrainian Nazism”. Events were initiated by local branch of Russian para-military youth movement “Yunarmia” (Youth Army). It should be emphasized that goals of Yunarmia” have nothing to do with humanitarian missions or protection of children’ rights. 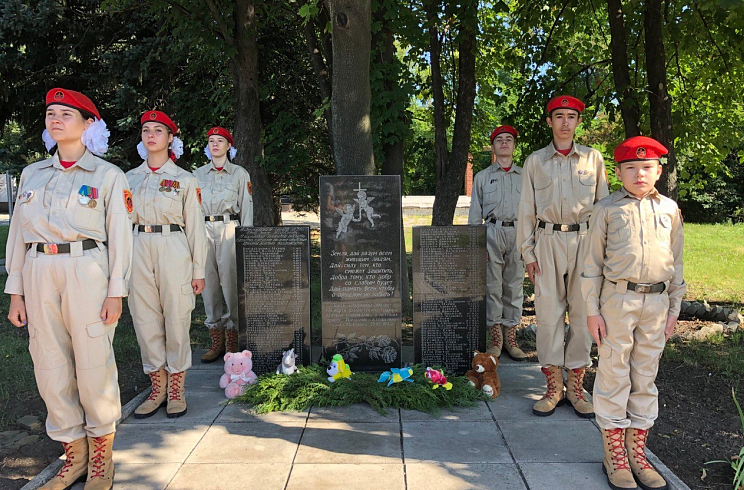 In August 10, 2022, Anna Arteeva together with Volodymyr Taranenko, the head of “Narodnaya Druzhyna DNR”, visited Kherson and “met with youth”. The photo of meetings demonstrates huge banner “Kherson oblast. We are together with Russia”.

More to that, the Association of Volunteer Centers and project #мывместе с Донбассом have clear connections with international humanitarian organizations. The Association declared fund raising campaign to support #мывместе in Donbas on June 8, 2022. The link to report on the use of collected funds leads to the website … of “Russian Red Cross”!

Archived link opens “Public report about the use of financial resources received by All-Russian non-governmental organization “Russian Red Cross” within Complex charitable program of Russian Red Cross to help victims of the Ukrainian crisis in 2022 for the period from February 21 to May 25, 2022”. The blank of the Red Cross has the logotype of #мывместе. In accordance with this report, the campaign raised almost 180 million Russian Rubles.

In order to secure its public legitimacy, “Russian Red Cross” regularly highlights its contacts with UN bodies. Russian Red Cross announced on July 5, 2022 that an agreement on expanding assistance to Ukrainian refugees was concluded between Karim Atassi, the head of office of the United Nations High Commissioner for Refugees in Russia, and Pavlo Savchuk, the head of Russian Red Cross.

Russian approach towards humanitarian crises is undoubtedly different from the approach of civilized world. For Ukrainians, attempts to call people recruited by Russian governmental bodies under surveillance of the Federal Security Service as “volunteers” seem idiotic and offending. 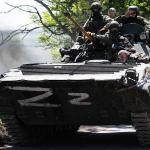 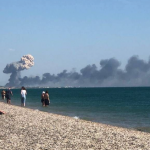 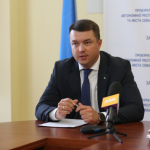