Главная » Marat Khusnullin, the «overseer» of Crimea in the Russian Cabinet of Ministries, still not sanctioned by the National Security and Defense Council of Ukraine 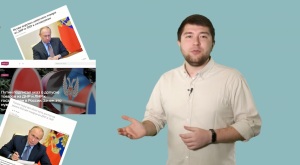 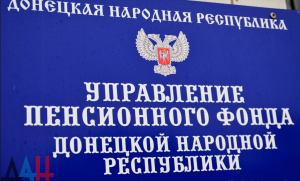 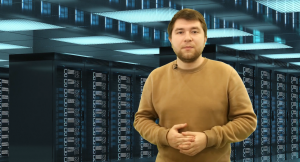 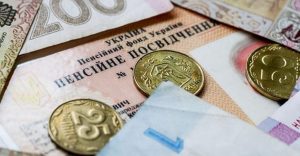 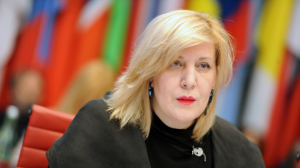 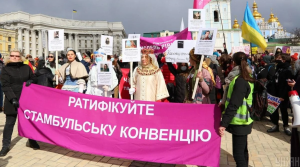 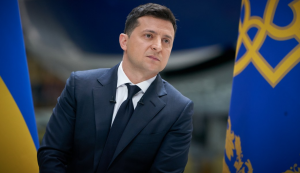 Marat Khusnullin, the «overseer» of Crimea in the Russian Cabinet of Ministries, still not sanctioned by the National Security and Defense Council of Ukraine

08.11.2021
The Center for Journalist Investigations «Head of Crimea» Sergey Aksyonov and Marat Khusnullin, the Deputy Prime Minister of the Russian Federation. Photo by rk.gov.ru

Marat Khusnullin was born in Tatarstan. He was appointed the Deputy Prime Minister of the Russian government on January 21, 2020. It happened several days after Mikhail Mishustin headed the Russian Cabinet of Ministries (January 16, 2020). Mr. Khusnullin was given the task to oversee occupied Crimea.

Ukraine did not impose sanctions on Mr. Kozak, though, he «oversaw» Crimea since the very beginning of its occupation, created illegal «Crimean authorities» and «built» Crimea into Russian political and legal framework. Unlike Ukraine, the European Union and USA included him into their sanction lists in April 2014. It seems Ukraine is not going to do the same because Mr. Kozak is the political advisor of the President of Russia at the Normandy Format talks and he is vis-à-vis of Andrii Yermak, the Head of Office of Ukrainian President Zelensky.

Marat Khusnullin has nothing to do with any international negotiations or formats about the occupation of Crimea or the war in Eastern Ukraine. He is Moscow «overseer» of Crimea and Sevastopol and is responsible for the Russian governmental policies about occupied Crimea.

He surveys objects being built within the FTG, for example, «Tavrida» highway that has dual purpose – civil and military

The construction of this highway made and is making irreversible negative impact on the environment of Ukrainian Crimea. The predatory mining of natural resources is conducted for construction. The sand is extracted in the water area of the Black Sea and Donuzlav Lake. The rubble is mined throughout peninsula. Open pits for rubble extraction look like wounds on the body of Crimean mountains and steppe. Extraction of rubble at Agarmysh mountain near Izumivka village in Kirovsk district of Crimea, July 2021. Photo by RFE/RL

Mr. Khusnullin pays special attention to the water supply of Crimea. Today it is the key problem for maintaining troops and decent life standards Russia is not able to solve.

Marat Khusnullin presented the complex plan to secure water supply of «Republic of Crimea» and Sevastopol City to Putin on October 21, 2020. It is about pumping out the underground water of the peninsula. Its implementation already causes negative environmental outcomes and violates rights of people.

The Center for Journalist Investigations conducted detailed analysis of occupants’ decisions to solve the deficit of water resources in Borys Petrunyok’s study «Water priorities of occupants in Crimea».

As the study of the Center for Journalist Investigations concludes, «it seems the occupation administration of Crimea consciously sacrifices needs of certain communities for meeting needs of other local communities. Only one argument can support such a «rational» use of water resources. Sevastopol is not just a city. It is the main naval base of the Black Sea Fleet of the Russian Federation on the occupied peninsula. The number of Russian military in the city increased whereas the total city population almost doubled as families of Russian servicemen relocated to Sevastopol». 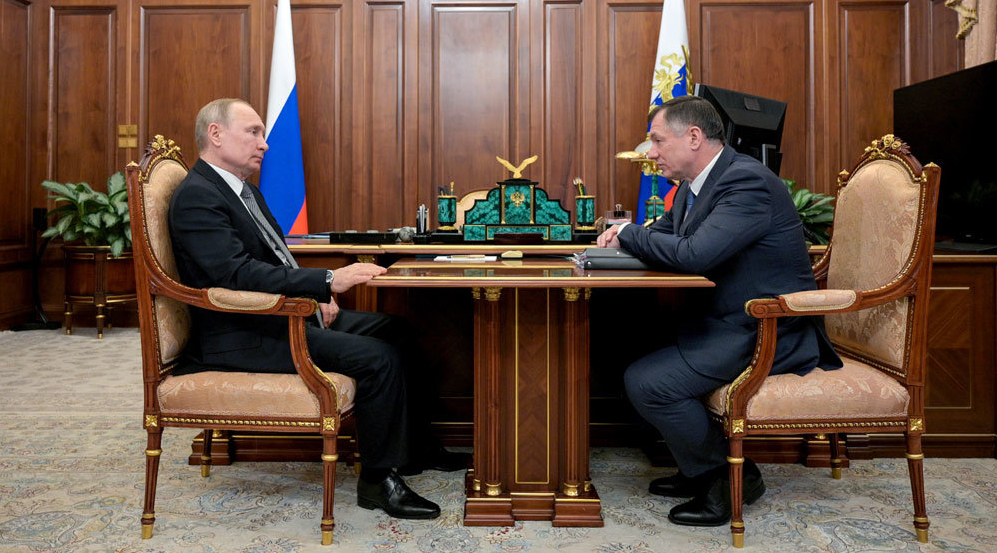 The construction of desalinators \ watermakers is also largely influenced by the position of Mr. Khusnullin. So far, he blocks attempts of Sergey Aksyonov to receive from Kremlin additional billions for supporting Crimea. The policy of Russia towards Crimea is purely colonial – to pump out as many resources of peninsula as possible.

Another task allocated by Putin to Mr. Khusnullin is about exploration of water resources under the Azov Sea. Exploratory drilling to identify water deposits and their quality has been already launched. In this case, Mr. Khusnullin directly violates the international law and still acting bilateral agreement between Ukraine and Russia about the Azov Sea. In accordance with the agreement signed in 2003, the Azov Sea is the internal sea of two countries. Any business activity of one party in the sea is possible only under consent of another party.

Here is the final sphere of Mr. Khusnullin’s activity in Crimea – land redistribution and construction. Expropriation of Ukrainian state lands in Crimea opened huge land market for Russian developers. They hurried to meet growing demand of incoming Russian citizens for housing and commercial property development. This year the Putin’s decree to ban non-citizens of Russia from owning land in «border districts» of Crimea and Sevastopol was enacted. It is about coast of Azov and Black seas and neighboring districts and cities. It is the most lucrative and expensive land.

Experts of Regional Human Rights Center identified approximately four thousand victims of illegal withdrawal and destruction of property in Crimea and Sevastopol. Their number will grow as Putin’s decree covers 11.5 thousand of Ukrainian citizens living in «border districts». This decree about «landlessness» may touch upon citizens of 55 countries who own land plots on the peninsula.

Expropriation of land plots also includes those Crimean inhabitants who received Russian passports before the occupation as local «courts» considered it illegal. Massive expropriation also targets thousands of members of dacha cooperatives. All lands will be used for large-scale construction by Russian companies. This process was already initiated in some communities.

«Respondents of «Company» suggest that Crimea was included into «border territories» after Vladimir Putin’s visit to the peninsula on March 18. The purpose is to forcibly bring many lands to the market and revive stagnating construction industry.

The construction of houses is the basis of local economy. It is also the main source of corruption rent. Senior public officials openly lobby interests of developers. Sometimes they are developers themselves. Vladimir Konstantinov, the head of the State Council, is the founder and protector of «Konsol», the group of construction companies. Yevgeny Kabanov, the Deputy Prime Minister of the Republic of Crimea, founded «Interbud» company, the subcontractor of the local government. The family of Sergey Aksyonov, the Head of Crimea, is related to BK «Monolith». Marat Khusnullin, Russian Deputy Prime Minister and new overseer of Crimea in the Russian Cabinet, is also connected with construction business» (see the article «Ukrainian owners are pushed out of Crimea»).

Recently Yevgeny Kabanov, the Deputy Prime Minister and main developer of Sevastopol, was arrested and accused of fraud. It means he can be excluded from the list of beneficiaries of current redistribution of Crimean lands. It is possible that Mr. Khusnullin was involved into his arrest. Mr. Kabanov was responsible for the implementation of Crimean FTG whereas Mr. Khusnullin was his boss. It is also likely that developers Aksyonov and Konstantinov will have less place under Crimean sun as Russian large construction companies will push them out. Here is the brief profile of construction business of Marat Khusnullin. We will skip the early period when he was private entrepreneur. His construction career started in 1997 when he headed construction trade-industrial company «Ak-Bars». Then, he was elected the deputy of the State Council of Tatarstan. In 2001, he was appointed Minister of Construction, Architecture, Housing and Utilities of the Republic of Tatarstan. Before appointment to the government of the Russian Federation, Mr. Khusnullin was Deputy Mayor of Moscow for Urban Development and Construction (since December 2010).

As he moved up the career ladder, assets of Khusnullin’s family grew. «Otkrytye media» studied reports of companies related to Roza Khusnillina, mother of Deputy Prime Minister, his former wife Lilia Kharisova and two children – Albert and Alina (Kireeva after marriage). Journalists concluded that Khusnillin family managed the portfolio of land plots in Tatarstan with the total area of 8 587 hectares (it is more than Guernsey Island and two times less than Liechtenstein). Total value of assets was more than 3.2 billion Rubles.

Later journalists of BAZA media conducted their own investigation. They found Khusnullin’s palace in Serebryany Bor, with the value of one billion Rubles (he had to declare it) and assets of his daughter Alina in offshores (they were uncovered by Pandora Papers). Albert Khusnullin, the son of Deputy Prime Minister, owns property management companies and agricultural holding.

In July 2021, assets of Mr. Khusnullin significantly increased as he was charged with the supervision of Rosreestr (the Federal Service for State Registration, Cadastre and Cartography). In order to understand new Khusnullin’s powers about expropriated lands of occupied Crimea, we quote his interview to Russian TASS:

«Today Rosreestr plays key role in securing the proper functioning of land and property sphere in the country. It analyzes the effectiveness of the land use, in particular, for housing construction. Our joint work will optimize the land use and will improve the urban planning in the country».

We believe we provided enough evidence that Marat Khusnullin is the occupation overseer of Crimea, main implementer of the Russian discrimination policy, responsible for the redistribution of expropriated assets of Ukraine and Ukrainians. The National Security and Defense Council of Ukraine must impose sanctions on Mr. Khusnillin.

The article is created within the special project of the Center for Journalist Investigations «How Crimean sanctions work?», in partnership with ZMINA. Центр прав людини. 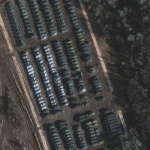 Sorry, this entry is only a... Читать больше